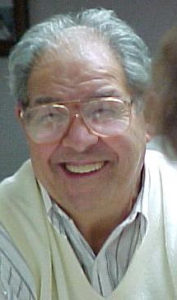 Salvatore “Sam” DiGregorio was born in Lercara Friddi, Sicily on March 3, 1932, to Francesco and Guiseppa DiGregorio. The DiGregorio’s had eight children. Due to World War II, work was scarce and the family moved to Liege, Belgium when Sam was 14 years old. He married Theodora (Dora) on September 15, 1951. In June 1954, Sam and Dora moved to St. Louis with their two small children, Guiseppa and Francesco.

In June of 1971, Sam seized an opportunity and started a small corner grocery store on “The Hill”. He worked long, hard hours with his family, now including Antonia and Giovanni, by his side. For 29 years, Sam distinguished himself as the proud owner of DiGregorio’s Italian Market where he earned a glowing reputation. DiGregorio’s Market became well-known for delightful Salsiccia and other Italian products, and Sam became deeply respected and admired by all those who patronized his store for his honesty, integrity and excellent service.

DiGregorio’s Market became known for their Italian Salsiccia and patrons came not only from St. Louis, but from all over the country for specialty meats, such as different cuts of veal, Braciole, Spiedini, and more. Restaurant owners began purchasing DiGregorio’s products. As the business grew, the company expanded their product line with items such as precooked sauces, frozen pastas, imported vinegars, wines, oils and pasta.

Active in business until his death in 2000, Sam was an invaluable member of his community and was exceedingly proud of his professional affiliation with such organizations as the Bocce Club, and the Sicilian Cultural Association. In 1994, UNICO, a charitable Italian group honored Sam as its Man of the Year. In 1998, the St. Louis Columbus Day parade committee proudly selected Sam as Grand Marshall in appreciate and recognition of service to the Italian-American community.

Today, DiGregorio’s is owned and operated by Dora and her three surviving children: Frank, Toni, and John. Now into the third generation, DiGregorio’s is proud to continue Sam’s legacy of honesty, integrity, excellent service, and community betterment. “Our recipe for success was formulated by our father,” says John DiGregorio. “Even as our business grows, we will continue to ensure that our customers remain our greatest priority.”